by Elaine Gallagher      These stories definitely are NOT intended to be used as a quiz, homework, or class assignment! READING ALOUD is a stimulating […] 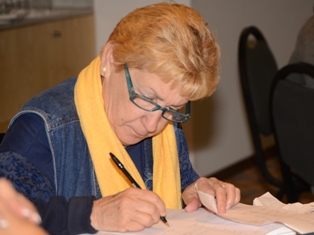 READING ALOUD is a stimulating technique to promote oral listening and spoken fluency for children of all ages.  DAILY reading aloud, for all ages, is our goal. The same story can be read several times during a week. The students actually enjoy hearing them over and over, because the tale will begin to make more sense, and fluency builds.

Following are the final three stories for 1st graders.

(Eager and apt readers, may also read these stories by themselves.)

(SHOW: a playground with swings, a jungle gym, and slide)

FUN IN THE PLAYGROUND

“Wow! It is windy out here,” yelled Juan.

Juan was in the playground of his school with all the other children of first grade.   He and some friends, William, Terri, and Miguel, were playing on the slide.  They all loved to slide down the slide. Over and over again, they played on the slide.

(NOTE TO TEACHER: Explain that the word “slide” is used here as a NOUN and as a VERB. ( a “thing or object…something you can see and touch”  and “as an action…something that you do.”  Have children identify in the story when “slide” is an action, and when it is an object.)

(SHOW: a slide with 2 boys and 1 girl in line to slide, and 1 child sliding down the slide.)

“Let us hop ten times to get to the swing,” said Juan.

“O.K.”, said the other children.   The children hopped to the swing.

(NOTE TO TEACHER:  Explain again that “swing:” , like “slide” can be used to tell about a “thing”, or to explain an action.”

(SHOW: four children hopping and a swing set, with four swings hanging from the pole.)

“This is fun,” the four children said together. “I love to swing, “ said Terri as she swung higher and higher.

“You have fifteen more minutes to play. After we leave the playground”,  explained Mrs. Garza to her children, “we will have art class. We are  going to make a big sunflower.”

Some of the children were climbing on the jungle gym.

(SHOW: 3 boys and 1 girl in a circle, passing a ball from one to another.)

So all the children left the playground, went into school, and went to their class with Mrs. Garza.

“After everyone goes to the bathroom and everyone washes his or her hands, we will begin our art project.  We will make a sunflower.”

“This was a fun day! We had fun in the playground,” the children exclaimed. “And we will have more fun making a sunflower, “Mrs. Garza answered.

(NOW : the students will each make an sunflower. It will look nice if you have the students glue real seeds in the center of the flower.)

(SHOW: a zoo, with some animals in cages, and some trees, and people walking.)

ANIMALS IN THE ZOO

Grandma Olivia told her two grandsons, Daniel and Alan, that she had a surprise for them.  “In fact, I have two surprises for you,” she said.

“You will love the surprises“, said Grandma Olivia.

“Tell us!  Tell us!” shouted Daniel and Alan.

“We are going to the zoo this afternoon, after lunch,” Grandma Olivia told her two grandsons.

“I called the zookeeper, and she will have an animal show this afternoon.  The zookeeper is having feeding time for the animals at 4:00 p.m.   We will go to see the animals eat. It will be fun!  First, you have to telephone your mother  to get permission.  Then we will go after lunch.”

The boys were spending Saturday with their grandmother as they did almost every Saturday. Daniel is older than Alan, so he went to the phone to call his mother.

“Mama, Grandma Olivia invited Alan and me to the zoo this  afternoon. May we go?   P L E A S E !  We will see the zookeeper feeding the animals.  I have never seen the zoo animals eating.”

(SHOW: a boy talking on the telephone.)

After lunch, Grandmother Olivia, Daniel and Alan took the number 17 bus to the zoo. The boys were very excited.

“What is our other surprise?” Alan asked his grandmother.

“What do you mean?” asked Grandmother Olivia.

Alan said, “You told us you have TWO surprises for us today.  One surprise is a trip to the zoo. What is the other one? “

“Oh,” Grandmother declared. “You have a great memory, Alan! You are  right. After we go to the zoo, we are going to make something for you to bring home. It will be an art project.  It will show you an animal we will NOT see in the zoo.  Later you can guess what animal we are going to make.”

They arrived at the zoo, and Grandmother introduced her two grandsons  to the  zookeeper.   “You will see many animals receiving their food.  Some, like the tiger, eat meat.  Others, like the elephant, eat plants.

(SHOW: a tiger and an elephant…in separate areas, as they are natural enemies.)

Grandmother, Alan, and Daniel stayed three hours in the zoo. They saw the zookeeper feed hay to the elephant, and fruit to the monkey. The bear received a fish and some berries.  The seal, too received  several pieces of cut-up fish.

(SHOW: an elephant, a monkey, a bear, and a seal…all in appropriate zoo areas, all of them eating appropriate food.)

They continued walking and saw large cages, with an area of trees and grassland, so that the animals could run for exercise.  The children and their grandmother passed by a big lion, and three smaller lions, and three baby lions.   They were eating pieces of meat.

“Look at the baby lion. Listen!” exclaimed Daniel.  “The baby lion  meows like my pet cat.”

“Why isn’t the baby lion eating the meat that the zookeeper fed the lions?”  Daniel asked.

Grandmother asked, “Why do you think?”

“I know why, exclaimed Alan!  “The baby lion still drinks milk from his mother.  His teeth are not strong enough to eat meat. When he is bigger, he will eat meat.  Now, he only drinks his mother’s milk.”

(SHOW: a group of lions….a big male lion with ruff around his neck, 3 adult female lions, and 3 baby lions…)

“Here are some tigers”, grandmother said.

The tigers also ate big  pieces of meat. There was one baby tiger and three larger tigers.  The baby tiger also meowed like Grandmother’s pet cat at home. It sounded just like the baby lions.

“Lions and tigers belong to the cat family”, said Grandmother, “so sound alike when they are babies.”

Alan, Daniel, and Grandmother  continued walking. They saw a huge cage with many birds, big ones and small ones.  One bird did not say  “Tweet, tweet”, like the other smaller  birds. This bird was large with beautiful feathers of red, yellow, blue, and green. He had  big claws and a big beak.

It was a parrot. It did not say, “Tweet, tweet”.  It talked.  It said, “Hello beautiful!” whenever a woman walked by.

When Grandmother passed by the bird cage, the big bird said, “Hello beautiful!”

(SHOW: a parrot in a huge cage with some other, smaller birds in the same cage.)

“Now let’s go home to make our art project”, Grandmother told the boys. She continued, “What animal didn’t we see at the zoo?” she asked.

“We don’t know.  There are so many animals in the world. We did not  see them all”, Daniel complained.

“I will give you a clue”, grandmother told him. “It is black and white.”

“No, we saw zebras in the zoo today”, grandmother said.  “Another clue: it looks like it is wearing a tuxedo!”

“We know! We know”, shouted both boys together.

“Yes,” said grandmother.  When we get home, we will make a penguin out of paper.  We will have fun!”

“Hey”, said Daniel, “ Barney barks just like the seal we saw at the zoo.”

“Yes, seals do sound almost like dogs”, grandmother noted. “Now, let’s have a snack, and then we will make a penguin”.

“Thank you so much for a wonderful day, grandmother, the boys said.

(Now the students will each make a penguin from a pattern, then gluing black and white paper in the appropriate places. Color the beak yellow.)

(SHOW: balloons, party hats, and party horns, with a sign hanging over the door that says, “Happy Birthday!”)

“How old are you, Ana?” asked her teacher, Mrs. Brown.

“I am seven,” answered Ana.  “I will be eight tomorrow and my mother is going to give me a BIG party!”

“That is wonderful,” exclaimed Ana’s teacher. “What will you have at your party?” asked Mrs. Brown.

“We will have a sandwich, and a cookie, with a glass of lemonade to drink.”

(SHOW: a big plate with a sandwich, a cookie, and a glass filled with liquid.)

(NOTE TO TEACHER: Explain to students that “drink” can be a thing, (A NOUN) or an action word (A VERB.))

Ana continued, all excited. “ We are going to have cake and ice cream, too. My cake will have eight candles because I will be eight years old  tomorrow.  My mother will also have a big plate of fruit.

It will have apples, bananas, oranges, and grapes.  It will be great party!”

(SHOW: a plate with an apple, a banana, an orange, and a bunch of grapes.)

The next day, Saturday, was Ana’s birthday.  She saw a man and woman getting out of a car in front of her house. They had a big, red balloon that  had words on it.  The words said, “Happy Birthday!

“Grandma!  Grandpa!” shouted Ana.  She ran to hug them.

Other friends came to Ana’s house, too.  The party began.

Ana’s mother served everyone a cup, a plate, with a spoon and a fork.

They ate lunch.  Then Ana’s mother lit the 8 candles on the cake.

(SHOW: a birthday cake with 8 candles lit on the cake.

Everyone sang as Ana blew out the candlesand made a wish.

Ana had a wonderful day.

After everyone ate, Ana’s mother said, “Now  we will make something else to eat.”

“Don’t worry,” answered her mother.  “We are going to make a paper watermelon.  It will be fun, and we do not have to eat it!”

Ana and her friends and her grandparents all laughed.

(SHOW: a whole watermelon and a slice of watermelon)