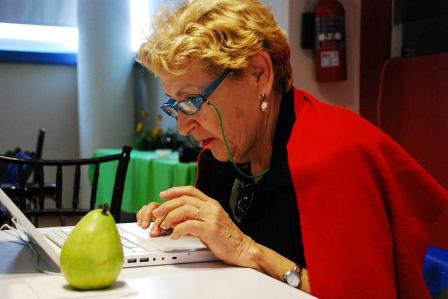 2,000 years ago, the Celtic people of the United Kingdom began the holiday we now know as Halloween. Every autumn, as days became colder and darker, the Celts made up a story to explain why winter came, and all the crops and flowers died. The Celts believed in a sun god who made the crops grow. But each year the sun god was attacked and held prisoner for six months by an evil power called Samhain, the “Lord of Darkness”, who brought the cold and darkness of winter days.

A New Year’s ceremony, to mark the weakening of the sun god and the triumph of Samhain, was held on October 31st by the Celtic priests. The priests wore long, flowing white robes and met on hilltops to light bonfires. Sometimes they would hurl animals or prisoners into the fires as a sacrifice* to please the cruel Lord of Darkness. The fire was strong; hot like the sun. The priests believed that evil spirits would fear the fire. Then the priests thanked the sun god for the good harvest, and at midnight they asked Samhain to let brightness and warmth return to Earth.

The night of October 31st was feared more than any other night of the year by the Celtics. They were sure that evil spirits lurked everywhere, so they started fires in their homes to keep evil spirits from coming inside. They believed that Samhain called dead people together and turned them into other forms, especially cats.

When much of Europe was conquered by the Romans, they gradually blended two Roman festivals, called Feralia and Pomona, with the Samhain festival. Feralia was a festival to honor the dead, and Pomona, was celebrated by the Romans spreading out apples and nuts to show their thanks for a good harvest. The Halloween custom of bobbing for apples comes from the Roman Pomona ceremonies. The Catholic Church contributed the name “Halloween” to all these traditions. November 1st is All Saints’ Day, which honors all saints who died for their faith. The night before All Saints’ Day – October 31st – was called “All Hallow’s Eve”, old English for All Holy Evening. Eventually, this name was contracted to “Hallowe’en.”

Halloween is celebrated in the USA now more than in Europe. Long before American children started trick-or-treating, people in Europe celebrated October 31st as a day of ghosts and goblins.  Trick-or-treating has its roots in receiving food in return for praying for the donors’ dead ancestors.  When the Irish came to North America, Halloween became very popular. Children started playing pranks each year on October 31st, blaming the pranks on evil goblins.

Costumes: People used to fear evil spirits, especially on Halloween. They hoped that by putting on masks and costumes, that evil spirits would leave them alone.

Jack O’Lanterns: A legend from Ireland tells about, Jack, a stingy man who was ordered to wander the Earth after he died, searching for a resting place. Because of all his bad deeds, Jack was forbidden to enter heaven. The devil gave Jack a piece of burning coal, which he put into a turnip, making a lantern. Irish children used to carve smiling faces on hollowed out turnips. On Halloween night they put them on a window to scare away witches. When the Irish moved to North America, they brought their Halloween beliefs and customs with them. But instead of turnips, they carved pumpkins which were more common than turnips. The carved pumpkin became called a Jack O’Lantern in memory of the old legend.

Trick-Or-Treating: In Ireland hundreds of years ago, some people celebrated  Halloween night by putting on white robes and masks. Then they marched from farm to farm begging for food or money in the name of the old Druid, “Muck Olla.” In exchange for the treats, the  beggars offered wishes for good luck and prosperity. On All Souls’ Day, the poor begged for “soul cakes”, square buns with currents. In return for the soul cakes, the beggars prayed for any dead relatives of the person giving the cakes.

The custom gradually changed, and children started getting apples, buns, and money when they begged.  Later, when the Irish came to America, tricks were added to the begging for treats. Halloween pranksters took gates off hinges, soaped windows, rang doorbells and ran away, and then blamed everything on leprechauns.

Superstitions: People wanted to know what would happen to them in the future, and because Halloween was a time of witches and goblins, some superstitions were started.

* Vey little is known about the Druids and there is no conclusive evidence that they made human sacrifices. Many historians believe that the references made on the subject by Juluis Cesar in “The war of the Galias” had the intention of justify the roman invasion of a barbarian people to whom they must impose the culture of Rome. [Editor’s Note]