by Elaine Gallagher, Ph.D.              This book has 8 sections. UNO will present one section in each publication of UNONEWS English Corner for 8 issues. […]

This book has 8 sections. UNO will present one section in each publication of UNONEWS English Corner for 8 issues. While the original book I wrote in 2012 was for the Secretary of Education in Mexico, pertaining to the PNIEB, (Programa Nacional de Inglés en la Educación Básica) I’ve updated the text to be able to apply it to any country, any school, any teacher, or any parent that wants to know more about how to design and support strong English programs.

Being bilingual used to be for highly-motivated immigrants to various countries, or for people who needed a second or third language for a job, or for people living in countries, such as Switzerland, who have no specific language in their country, so they need to learn French, Italian, and German.

Now, in the 21st Century, with international world travel necessary for work and pleasure, with globalization making out-sourcing work to other countries common, and with English becoming more and more the lengua franca of the world of science, computers, technology, business, medicine, music, films, and best-selling novels, bilingualism is essential for economic, professional, and social success.

The following diagram shows the effects of globalization on education. It is fully explained in various sections of this book. It summarizes graphically the base for world-class bilingualism, and areas of knowledge and application for teacher-growth. 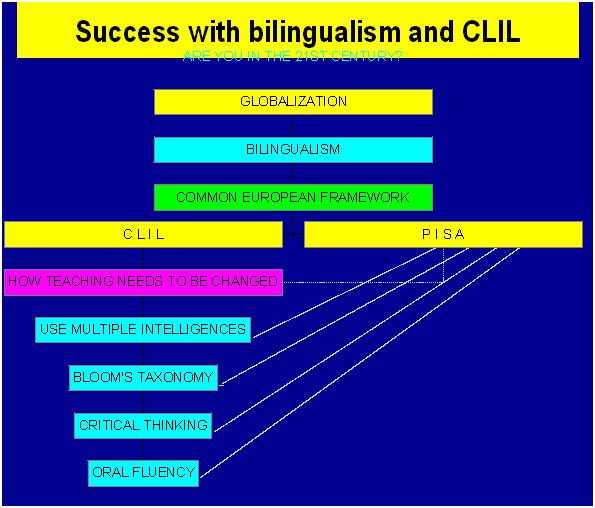 As you can see from the chart above, GLOBALIZATION has led to the necessity of BILINGUALISM.

Without clear designations of language levels, teachers, world-wide, were left to use exams, tests, or vague estimates to decide student and text levels. «Beginning», or «Intermediate», or «Advanced» were terms used to organize texts or class levels.

Why have a Bilingual Plan?

Three goals should be kept in mind with any Bilingual Plan:

Teaching English in our schools is not new. Private schools in many countries have included English in the curricula for two generations.

Now, both public and private schools see the need for strong English programs that work. More and more schools, world-wide, are supporting English teachers with materials, staff development, and world-class information about CEFR , CLIL, and leading philosophies and theories on language acquisition, in order that teachers be well-prepared in the classroom.

As more and more countries have initiated English programs, each            school with its own distinct focus, the need for a unified program, at national  levels, is becoming imperative.

The focus of most national plans is based much more on the CEFR standards and on CLIL philosophy than on specific methods or philosophies previously emphasized in traditional language studies.

GONE is the emphasis on grammar.

GONE are translations from L-1 to L-2 and the reverse.

GONE is emphasis on memorization.

GONE is the focus on errors and mistakes.

GONE are the endless lists, copying, and writing patterns.

The emphasis now is the social interaction among the students, practicing orally the social and cultural aspects of the language to be taught…in this instance, English.

Strong emphasis is given to Vygotsky’ssocial-cultural impact on language acquisition. Later in this book, we will look at Vygotsky’s research so you’ll be able to see the connection between his theories and the expectations of many national or world-class schools’ bilingual plans.

There are three areas of concentration in most bilingual plans, which are closely related to UNESCO’s Five Pillars of Education, which we will see in Section Three of this book:

1. Understanding what to do with the language…..

2. Understanding about the language….

how it’s structured, how to express well

3. Understanding about being with the language

knowing and using the cultural-social aspects

These three understandings will guide teachers to focus more on the social-cultural aspects of language teaching, resulting in oral fluency as the base of evidence of language acquisition. We’ll see more about these three aspects in SECTION THREE.

COMING UP NEXT ISSUE