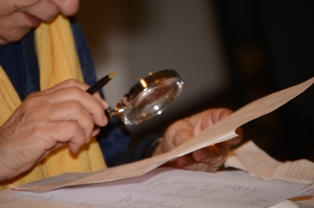 In the late 1980’s, more than twenty European countries began to research and document what skills and abilities needed to be exhibited to demonstrate language knowledge, in reading, writing, speaking, and listening, under various situations: social, professional, family, academic, and professional, etc.

After much work, in 1991, in Switzerland, the consortium of language educators and linguistic specialists,  presented their findings and recommendations in a 265 page document, named: «Common European Framework of Reference for Languages: Learning, Teaching, Assessment».

What they succeeded to do was to specifically list observable actions, which would exhibit language ability under a variety of circumstances, and at various levels.

See the following two charts to obtain a clearer picture of the CEFR.

Once the Common European Framework Reference was established and accepted, and publishers were required to eliminate the traditional designations of «Advanced», «Intermediate», and «Beginning» levels, language learning and teaching began to change.

Publishers now had to indicate on the front cover of their language teaching books, a small circle of yellow stars (representing the European Union).  Within the circle, the language level of the text had to be indicted, such as «A-1» or «B-2», etc.

Once this was in effect, schools and teacher-preparation programs had a dilemma. They asked, «How do we teach languages to students so they will reach the levels of  the CEFR?»

This was a serious problem, because since the CEFR emphasized oral fluency, bi-cultural knowledge, projects, small group activities, life-long learning, among other things, schools were not prepared. Most language courses were very traditional, with memorization, translations, workbooks to complete, grammar emphasis, phonics, fill-in-the-blanks, copying, language patterns to complete, all of which presented fake, artificial communication styles.

does not lead anyone to language fluency.

No one talks that way, so it was obvious that the traditional way of language teaching would not obtain the desired results of oral fluency, the kind of ability needed in the 21st Century.

In 1991, linguistic experts and language educators began to meet in Finland at the University of Jyvaskyla, in Helsinki, Finland. The diverse group of educators, from 20 + countries, headed by David Marsh, investigated many language teaching programs in order to plan what they would recommend to the European Union in keeping with CEFR goals. The linguists looked at what worked and what was not so successful. Their goal was to implement a teaching philosophy for the acquisition of a second language.

After looking at the positives and negatives of  30+ programs, the educators from 20 countries meeting in Finland to streamline,  simplify, and enhance language teaching, decided that they wanted to establish a PHILOSOPHY  based on the best practices of how languages are learned.

They named this philosophy:

Dr. David Marsh, originally from Australia, currently living in Finland, was Chairman of the committee that forged CLIL. His work with the integration of subjects in order to better learn a language, became part of the basic CLIL philosophy..

Much of the research on the «Natural Approach to Language Learning», by Dr. Stephen Krashen, from the USA, was also incorporated into the framework of CLIL philosophy. Information of Krashen’s work follows this section on CLIL. .

How should CLIL philosophy affect your teaching? What are its basic premises?

CLIL… A PHILOSOPHY OF LANGUAGE LEARNING

HOW CAN WE IMPLEMENT CLIL IN THE CLASSROOM?

Why is CLIL important?

With the expansion of the European Union, diversity of language and the need for communication are seen as central issues. Even with English as the main language, other languages are unlikely to disappear. Some countries have strong views regarding the use of other languages within their borders. With increased contact between countries, there will be an increase in the need for communicative skills in a second or third language.

Languages will play a key role in curricula across Europe,  and North, South, & Central America. Attention needs to be given to the training of teachers and the development of frameworks and methods  which will improve the quality of language education.

The European Commission and various American countries have been looking into the state of  bilingualism and language education since the 1990s, and have a clear vision of a multilingual Europe in which people can function in two or three languages.

How does CLIL work??

The basis of CLIL is that content subjects are taught and learnt in a language       which is not the mother tongue of the learners. Knowledge of the language becomes the means of learning content. Language is integrated into the broad curriculum. Learning is improved through increased motivation and the study of natural language seen in context. When learners are interested in a topic they are motivated to acquire language to communicate.

The advantages of CLIL

CLIL in the classroom

CLIL assumes that subject teachers are able to exploit opportunities for language learning. The best and most common opportunities arise through reading texts. CLIL draws on the lexical approach, encouraging learners to notice language while reading. «Texts can be actual paper books, or in digital format, which is becoming more common and popular with learners because (1) Teachers can project the text for all to see. (2) It’s easier and faster to turn pages (3) They can use ear-plugs to listen to music as they read. (4) An i-pad is easier to carry than several textbooks,

The future of CLIL

CLIL is here to stay. It’s not a fad. There is no doubt that learning a language and learning through a language are concurrent processes, but implementing CLIL requires a rethink of the traditional concepts of the language classroom and the language teacher.

The immediate obstacles seem to be:

Until more and better CLIL training for teachers and materials issues are resolved, the immediate future remains with parallel rather than integrated content and language learning. The need for language teaching reform will make CLIL a common philosophy by many education systems in the world.in the near future.

Even though we may associate CLIL with oral fluency, which, yes, is an important component of CLIl, we cannot forget that writing, too, has to be practiced using authentic topics, not simply copying sentences or listing past tense verbs. Using content areas, encouraging students to work in pairs, helps with the creative process. Here are some ideas for writing experiences.

Lists (for shopping, gifts, parties, trips, things to do)

Studies are now beginning to prove that CLIL philosophy applied in the classroom is effective, not only in language acquisition, but also in the acquisition of academic knowledge in various subjects.                   (Vienna Working Papers)

THE NATURAL APPROACH TO LANGUAGE ACQUISITION

One of the foundation ideas of CLIL

Dr. Stephen Krashen, as previously mentioned, was pivotal           in the development of the framework of CLIL philosophy. Following are some of his ideas, based on more than 30 years of linguistic research concerning the importance of language «acquisition» as opposed to «language learning».

STEPHEN KRASHEN:
«Acquisition requires meaningful interaction in the target language – natural communication – in which speakers are concerned not with the form of their utterances but with the messages they are conveying and understanding.»

STEPHEN KRASHEN:
«The best methods are therefore those that supply ‘comprehensible input’ in low anxiety situations, containing messages that students really want to hear. These methods do not force early production in the second language, but allow students to produce when they are ‘ready’, recognizing that improvement comes from supplying communicative and comprehensible input, and not from forcing and correcting production.»

STEPHEN KRASHEN:
«In the real world, conversations with sympathetic native speakers who are willing to help the acquirer understand are very helpful.»

WHAT’S YOUR VIEW OF THESE STATEMENTS

ARE YOU ACCEPTING THEM, OR ARE YOU STILL IN DENIAL?

Coming up next issue: