by Elaine Gallagher      Now is the turn for reading aloud stories for the 4th and 5th graders. These stories definitely are NOT intended to […] 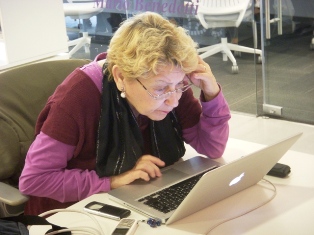 Now is the turn for reading aloud stories for the 4th and 5th graders.

READING ALOUD is a stimulating technique to promote oral listening and spoken fluency for children of all ages. DAILY reading aloud, for all ages, is our goal. The same story can be read several times during a week. The students actually enjoy hearing them over and over, because the tale will begin to make more sense, and fluency builds 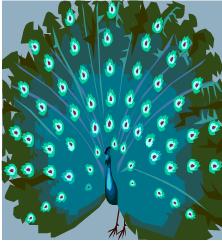 A peacock is a beautiful bird. The female peacock is very plain and is called a pea hen.  When we think of a peacock, usually we are thinking of the male.  The male peacock is outstanding.  It has huge, gorgeous tail feathers that fan out into a beautiful arch shape.

Paul is a peacock.  He is proud of his feathers.

If you can see his feathers up close, you can see how beautiful they are. Many peacocks can be seen proudly strutting in gardens of famous hotels or of kings.

Paul’s head up close looks like he is wearing a crown.  Paul is so proud to be a peacock. He has gorgeous, long tail feathers that he can fan out, and he has a crown of feathers on his head.

Paul used to live in a circus. When the circus closed, the owner found a new home for Paul. Poor Paul. He had been happy in the circus. He was sad he had to leave.

First, Paul went to a hotel, where peacocks were strutting on the front lawn.  But when summer was over, and the tourists stopped coming, the hotel needed to find homes for the peacocks.

Paul went to live on a farm. A farmer bought him so his farm would have an unusual pet.  Paul is the only peacock on his farm.  There are many turkeys and chickens, and ducks, geese, pigs, and cows, and swans…but only one peacock.

Paul had a good, happy, peaceful home on the farm.  There were no kids running after him to pull out his tail feathers like at the hotel. Paul was peaceful and he was proud. He spent much time teaching the turkeys, the chickens, the ducks, the geese, and the swans how to be proud.  Only the swans understood how to be proud, so they were easy to teach.

Paul had to teach the others to be proud. “You are elegant,” Paul said to the goose.    She stood up a little taller, and looked more proud of herself.

“You have such a beautiful neck and gobbler,” Paul said to the turkey. The turkey gobbled and stretched his neck a bit longer, and he seemed to grow taller.

“What gorgeous smooth white feathers you have, and such a nice long neck, too,” Paul said to the geese. They fluffed up their feathers and stood tall, making typical squawking sounds that geese make.  They honked in loud, proud voices.

The farmer asked Paul, “Why do you teach everyone on my farm to be proud?  I know that there is a saying, ‘Proud as a peacock’, so you need to be proud.

But we also hear other sayings such as, ‘Silly as a goose’, or “He’s a chicken’, when someone is cowardly. Or we hear, ‘What a turkey’, about someone who fails.”

“Yes”, said Paul, “I have heard those sayings, too. But so have all the turkeys, the geese, and the chickens. When they hear those things, they become, more timid, and unfriendly.  When they feel good about themselves, they stand tall, and they are happier, and they help everyone to be happy, too.  So I spend my time praising the other animals. If we are all proud, we will be happy.  It will help everyone on the farm.”

“I hope,” said the farmer, “That you keep teaching everyone to be proud. I never knew how important it is to be proud. I am so proud that you are living on my farm.”

Paul, the proud peacock, said, “You are the best farmer in the world. I am so happy you chose to take me home with you. You are terrific!”

The farmer stood a little taller, puffed out his chest a bit more, and looked proudly at his farm.  Paul, the proud peacock looked back at the farmer and spread out his beautiful tail feathers. He was proud that the farmer liked him to teach others to be proud.

1. Art:  You can have students make a peacock, made from paper or clay.

2. You can also have children investigate in a computer more facts about peacocks.  Then they can make a peacock, working in teams of two, so they can make lots of feathers for their peacock.

3. Emotional intelligence:Discuss PRIDE….is it a good quality or a negative one? How can we develop pride?  What are some examples of pride? Who do you know that is proud?  Why?  Are you proud of yourself?  Why or why not?  Explain. Can someone be TOO proud?  How would you describe a proud person?  How would you describe a person who is TOO proud?

Vocabulary for fluency: get up in the morning, watch TV, take a shower, go to bed, do, eat, go, make, ride, run, before, after, noisy, quiet, products, production (wool production), comfortable, crowing (crowing about). 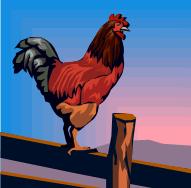 The Smiths raised animals and plants on their farm. They had forty sheep for wool production. They sheared the sheep every spring. They bagged the sheared wool and sold it to the cloth production factory in the city, forty miles away.

Life on the farm was peaceful and comfortable.There was only one problem on the farm: the rooster. He did not know he was a bother, but he was too noisy.  Most roosters yell, “Cocka-doodle-do, cocka-doodle-do” in the mornings, waking up the family.

Roosters are like an alarm clock that’s alive. Farms like to have roosters, because they wake up the family.

Farmer Smith and his family asked each other: “Doesn’t that rooster have anything else to do? Doesn’t he ever go to sleep?  We can hardly hear the TV because the rooster is too loud.”

“I can even hear the rooster when I take a shower,” said Farmer Smith.

“I hear the rooster when I get up in the morning,” said Mrs. Smith. “It’s OK in the morning, but all day screeching ‘Cocka-doodle-do’ is driving me crazy!” she exclaimed.

“The worst thing is that when I go to bed, I still hear the rooster squawking”, said Farmer Smith. “There is just too much noise. What can we do?” Farmer Smith asked his wife.

“Well,” answered his wife, “We could cook him and have a nice baked rooster for dinner. That would get rid of the problem”.

“No”, said Framer Smith.  I do not want to cook him.  It’s not his fault he crows a lot.  It is his instinct.  We can’t cook him in the oven when he is just acting on instinct.”

“Maybe he’s lonely”, said Joshua. “Maybe he wants to go back where he came from before we found him in the road.  Let’s let him loose, out of the chicken coop. and see what he does,” said Nick. They opened the gate.  The rooster looked around and then flew to the top of the fence. He looked around again, and then jumped down on the ground and began to run.

“Look at him go!” exclaimed Farmer Smith.  They watched across the field. They suddenly saw a big white rooster who flew to the fence.

“Look at that, “declared Farmer Smith. “They are walking together as if they are great friends or family!”

Mrs. Smith thought for a minute. Then she said, “They are probably brothers that were separated as babies. I bet our rooster was crying, hoping that his brother would hear him.”

Joshua, Nicolas, Mr. and Mrs. Smith looked across the grass.  They saw the two roosters walking together over the field.

“I guess we’ll have peace and quiet on our farm,” Farmer Smith told his family. “I am glad we decided not to eat the noisy rooster.  He’s with his family now and is happy.  He probably will only crow in the mornings now like a normal rooster because he found his family that he had been  crowing about. 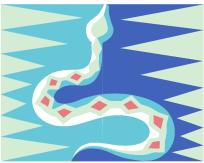 Samantha said, “I feel terrible. I feel warm». (We all know that snakes are usually cold). I feel awful!  I feel sick!”

“Poor Samantha” said her mother.  “Let me give you some hot chicken soup. That always helps me when I am sick. Then, I will give you one baby aspirin, and you will feel better soon.”

Samantha didn’t feel herself…so after she had some soup and took the baby aspirin her mother gave her, she curled up and went right to sleep.

She woke up in three hours.

“How do your feel?” asked her Mother.

“I feel great!  I feel like myself.  I want my baseball cap and my bat and ball!  I am ready to play baseball!”

“Mother, you are best doctor I know.  The chicken soup and baby aspirin helped me feel better. THANK YOU!”

Then Samantha slithered to home plate so she could begin to  play baseball with her friends.

1. Art: Have students in groups research about snakes, and complete illustrated reports.  They should separate snakes into harmless and dangerous groups. Samantha in the story is an example of a harmless garden snake.  Have some students find information about this kind of snake. Other students can look into the types of dangerous snakes, such as those who kill prey and/or humans by venom or by constriction. Are there other ways that snakes kill?

2. Multiple intelligence: What happens when you feel sick?  Who helps you?  Are there regular family traditions in your home that apply when you are ill? How can some illnesses be prevented?  Is it possible to be in charge of your own health?  Explain. Are mothers good doctors? Explain.